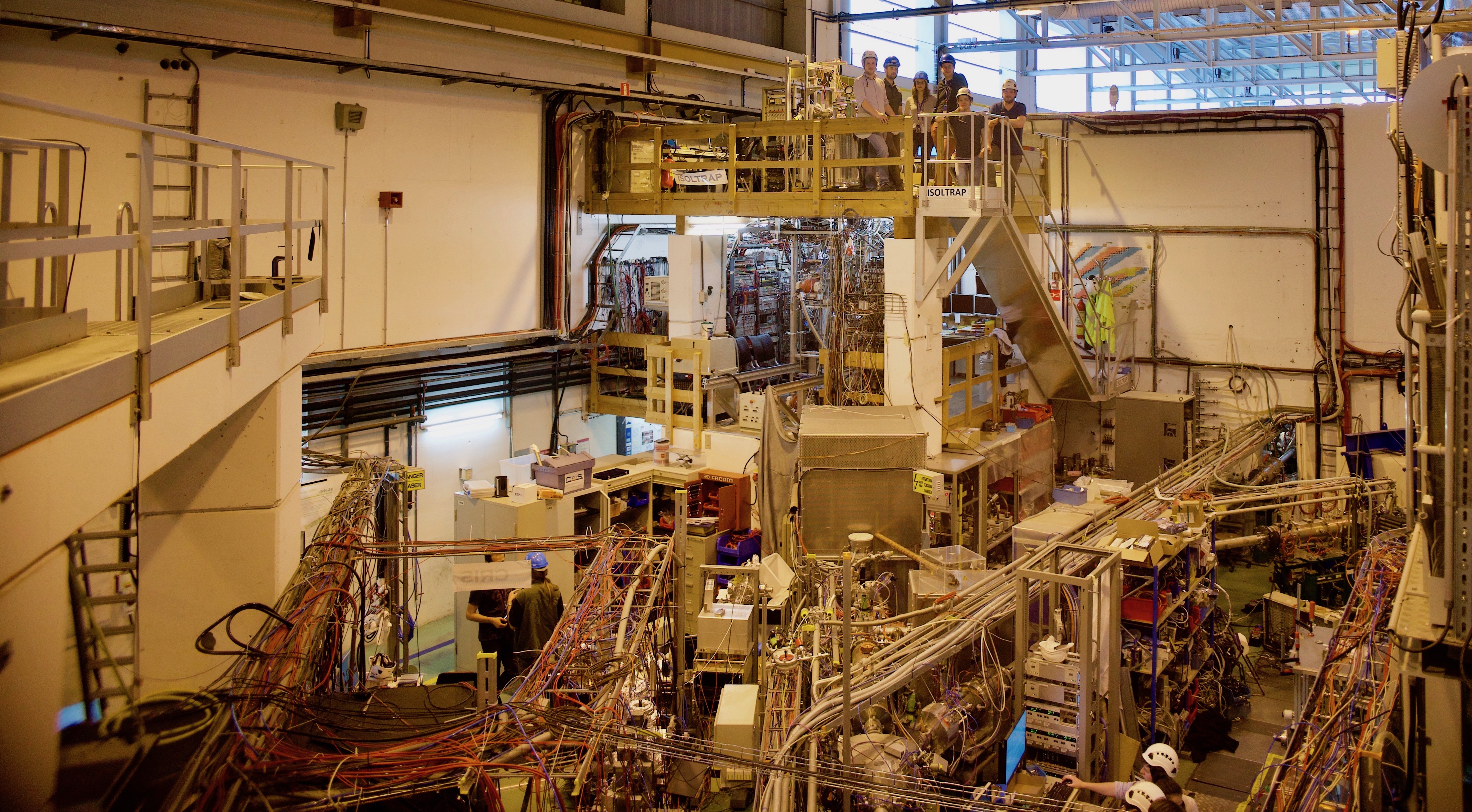 The high-precision mass spectrometer ISOLTRAP is located at CERN's radioactive ion beam facility ISOLDE. The current experimental setup consists of four ion traps: a radio-frequency quadrupole (RFQ, pink) trap for beam preparation, a multi-reflection time-of-flight (MR-ToF, yellow) mass spectrometer/separator (MS) and two Penning traps (in green and red). The linear, gas-filled RFQ ion trap is used to cool the 30-50 keV continuous beam, delivered to the setup by the ISOLDE facility or ISOLTRAP’s offline ion source, via collision with Helium buffer gas. In addition to cooling the device is also used for the accumulation of the ions. The beam leaves the so-called buncher as ion bunches which are subsequently processed by a MR-ToF device. There, isobaric contaminants can be suppressed or time-of-flight mass measurements can be carried out. After separation, the purified ion beam is then transferred to the helium-buffer-gas-filled preparation Penning trap (green) for further cooling. Finally, the beam is delivered to the second, precision Penning trap (red) where the mass measurement is performed. There, the time-of-flight detection technique (ToF-ICR) is used to determine the free cyclotron frequency of the ion species stored in our Penning trap, from which the mass can be extracted in conjunction with a reference mass measurement. Recently, the phase-imaging ion cyclotron resonance detection technique (PI-ICR) was implemented which allows mass measurements with fewer ions and higher resolving powers. 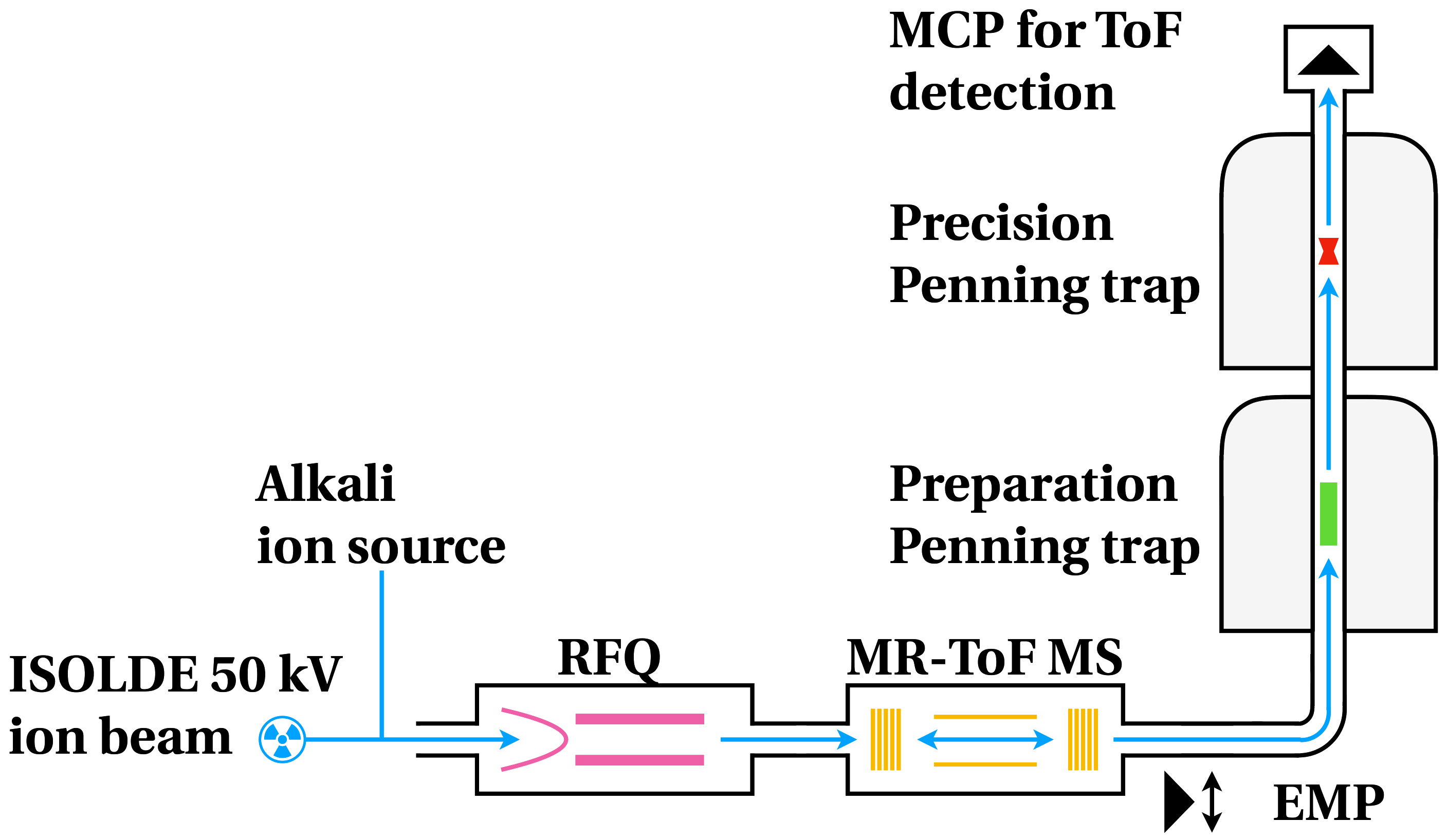 Upon entering the ISOLTRAP setup, the 30-50 keV ISOLDE ion beam is stopped and prepared prior to its injection into the MR-ToF MS. The ISOLDE ions are therefore electrostatically decelerated and then injected into a buffer-gas-filled environment. Similar to a quadrupole mass filter, a radio frequency is applied to a 4 rods structure so as to create an oscillating electric field which provides the radial confinement of the ions. In addition to the oscillating RF-field, each rod is segmented and an appropriately shaped DC potential is applied on each rod in order to guide the ions towards a trapping region formed by the potential applied to the last 4-segments of the of the 4-rod segmented structure; see figure below (different color indicates opposite polarity of the applied RF-potential). Due to the interaction with the buffer gas the energy spread of the ion ensemble is reduced and it is accumulated as a small ion cloud in the trapping region. The thermalized ion cloud is then ejected as a well defined bunch out off the trapping region. After a potential adaption in a pulsed drift tube the ion bunch is transported to and injected into the MR-ToF.

The MR-ToF mass spectrometer/separator is the second ion trap at ISOLTRAP which uses a switched cavity in order to inject/eject ions into/out of the trap. It consists of two electrostatic mirror sets between which trapped ions are reflected back and forth to increase their flight path (see figure below, containing a rendering of the trap, its potential in its working modes and a time-of-flight spectrum of 79Cu with contaminations). In only 10's ms the ions of well-defined kinetic energy can accumulate a path length of > 1 km. In this rather short trapping time, a resolving power of > 200000 is routinely achieved. As a result, efficient isobaric separation can be performed while measuring the flight time of an ion of interest to an electron multiplier (EMP) particle detector, which also allows to determine its mass.

The preparation Penning trap is a large cylindrical Penning trap (see rendering on the right) placed in the homogeneous field of a 4.7 T superconducting magnet. The ions delivered by the MR-ToF MS are captured in the trap and mass selectively cooled. The present preparation trap system has been optimized for a high mass selectivity in order to deliver clean ion bunches, which are essential for highly accurate mass measurements, to the precision trap.

The second Penning-trap is the so-called precision Penning trap and is used as a mass measurement device. The ion motion is driven by an azimuthal rf-field of frequency omega_rf . If omega_rf = omega_c = q/m * B, an increase of the amplitude of the cyclotron motion of the stored ions is achieved. This change in the ion motion is accompanied by an increase in radial kinetic energy in the radial plane, and as a result of the magnetic moment of the ion orbit. The increase in energy at resonance is detected by a time-of-flight technique. After excitation, the ions are ejected from the trap and allowed to drift through the inhomogeneous fringe field of the magnet to an ion detector. The presence of this magnetic field gradient gives rise to an axial force due to the orbital magnetic moment, resulting in an increase in the axial momentum of the ion. Hence, at resonance the ions reach the detector faster than off resonance. Hence, the determination of the time of flight as a function of the frequency omega_rf of the rf-field leads to a resonance, as shown in the figure below for the example of 131Cs+ ions. 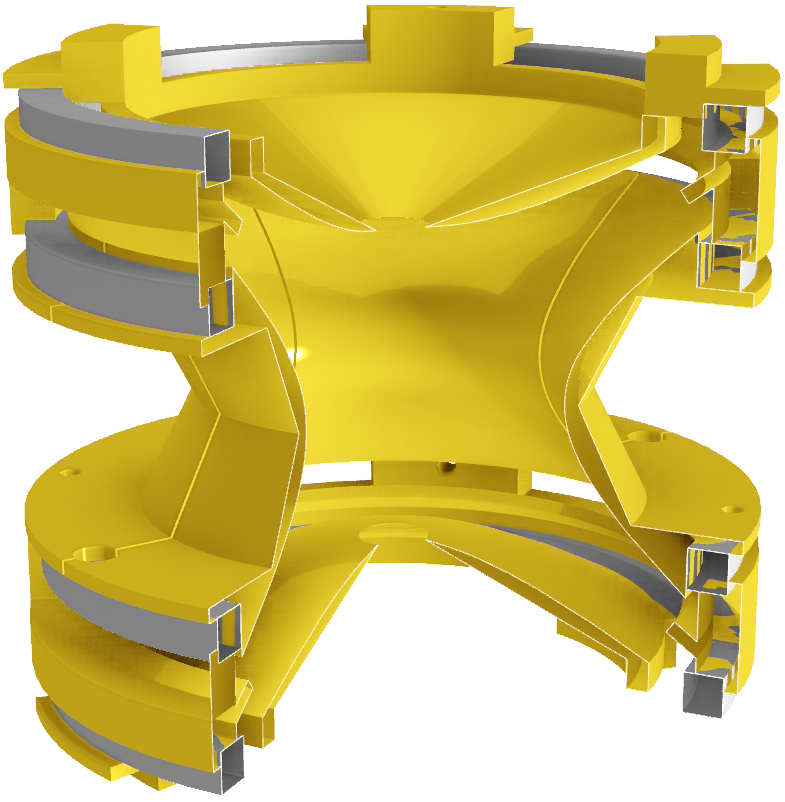 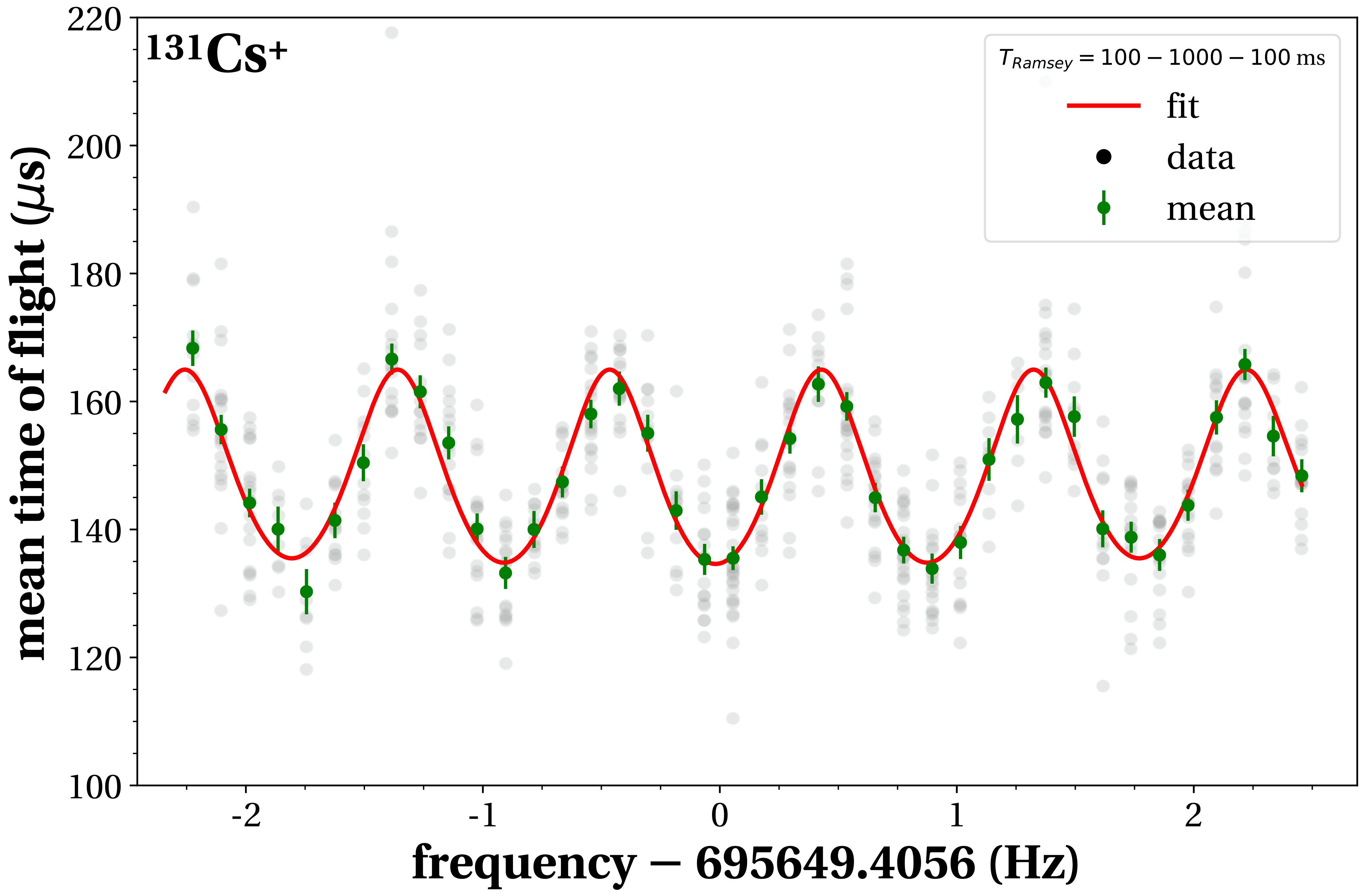